We Hear You – The Song of the Great Whales

We know that whales and other sea-mammals speak and sing and make sounds.  We have recorded their songs and we have listened to their voices.  We know that they talk to each other; they call their young; they maintain the integrity of the pod – the community.  We know they make sound to find food and to navigate the oceans.  They are utterly dependent on sound and their hearing to survive.

So what happens if their hearing is torn away and their means of communicating, foraging, and navigating is destroyed?  It’s very simple:  They Die.  I remember seeing my first “Save the Whales” bumper sticker in the 1970’s.  Is it possible that forty years later we have utterly failed to save the whales? 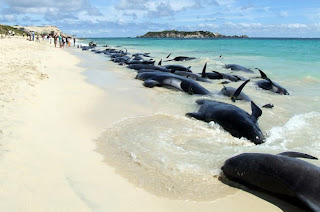 It should be common knowledge by now that many, if not most, of the incidences of whales and dolphins beaching themselves is the result of their being bombarded and maimed by sonar and other man-made sounding.  Because these kill-offs have become so common, some have speculated that the sea-mammals are committing suicide; that they no longer want to live in their compromised and polluted environment.  But they are not willingly grounding themselves; the God-given devices that keep them safe are systematically being torn from them.

There is indisputable evidence that the US Navy and some oil companies have effectively killed thousands, probably millions of sea mammals because of their indiscriminate use of sonar and other sounding technologies.  Now, the Navy intends to dramatically increase the frequency of their sonar testing as well as its intensity.  They admit that the death of millions of sea mammals will be a “side-effect”. 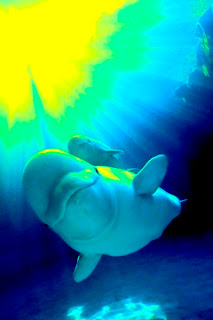 Every second-grader who has seen the Disney movie, The Lion King, knows that all living things are connected to each other.  I don’t need to explain that.  We are all connected.  What affects one of us, affects the whole.  We cannot drop a piece of plastic into the ocean without knowing that action may result in the death of a seabird or a fish.  We certainly can’t bombard the ocean with sound without considering all the sentient beings which live in that soup and cannot possibly just stand up out of the water until the deadly wave passes.  Imagine placing your ear on a long metal pipe while someone pounds on the other end with a hammer.

So now, so many decades after someone noticed the whales were in jeopardy, we again want to send our intentions and our hope and our loving energy to calming the sea again.  We want to send the hope of an awakening consciousness to all the agencies and corporations and individuals who must decide whether or not to drop a sound bomb into the ocean.

We want to save the whales because of the pure sense of awe and admiration we have for them, but we also see that for this time, they are the “canary in the coal mine”, and the loss of one of these gigantic “canaries” surely foretells our own demise.

My friend, Kim McDermott, has been journeying with the whales for quite some time in her Shamanic Breathwork sessions.  Now she is called to organize a group called, We Hear You  to help raise the consciousness of the collective around this issue.  She has created a new Facebook page to collect links and other important information.  You can expect to see a concerted effort on the part of many of us to send energetic healing to the oceans, protection to the sea mammals, and awakening to the ones who “flip the switches”.

And Kim is soon to launch a new petition to supplement the one here to collect a sum total of one million signatures to submit to the Department of Fisheries.

As humans, many of us have lost our sacred connection with the planet.  Now we must restore our relationship and heal the divide that threatens our return to harmony.  As we begin to realize how to bring into form our spiritual nature, it is critical that we now remember how to walk on the planet as if each step were a prayer.

You are also invited to share, copy, and distribute this article without permission.  John Berry Deakyne is a shamanic minister in Sedona, AZ, and author of the blog:  On the Road to Find Out, on-line at www.sedonawordsmith.blogspot.com