MY TRIBUTE TO BRAD COLLINS

I can’t believe we all crawled through that narrow birth opening in the Cliffside over Boynton Canyon so we could enter the Shaman’s Cave.  How did it feel to sit in the dirt with Brad and Star Wolf and enjoy this space between time and eternity?  It felt like heaven. 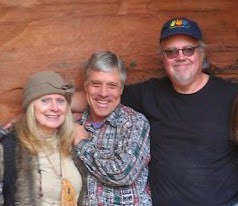 I savor every memory of my time with Brad Collins, and they come back to me now, in torrents:  meetings at the Earth Faire grocery in Asheville and then going for Indian food downtown, because the wife didn’t really like Indian food and he loved it; riding in his pickup to the men’s group in Black Mountain; and how the best part of that time was the going to and the coming back in the truck.  That was when I really got the lesson about how we are drawn to dysfunctional relationships because they “feel like home”.  It was a single sentence, uttered in the warm cab of a pickup truck, traveling through a cold dark night . . . and it changed me forever.

I remember trying to futilely air up the flat tire on a golf cart with a “fix-a-flat” I found at the Dollar store.  Then there was hooking up the generator to the sound system after that powerful thunderstorm that knocked out the electric, so everybody could journey even if we couldn't shower.

I recall his embrace after I did my bit at the Wise Wolf Council when he said, “You done good – the whole thing has shifted.”  Then later when he and all the men laid their hands on me to acknowledge my ordination.  I must have seen him present the teaching on “Inner Beloved” three or four times and it never got old; he was so sincere as he talked about his own journey toward appreciating his perfect essential self and his flawed human self.  I guess I needed to hear that multiple times.  Now I often repeat his story about how the angels gather when we do breathwork; and how that sharing moved me to try to see his wings and yours, and I could.

He facilitated the process group after my “soul-retrieval” journey at Isis Cove.  He knew that something important had happened for me and he had John Livingston stand in as my angel guide so I could commune directly with him; I laughed and I cried, and so did he.  He was not afraid to cry and he wore his feelings on his sleeve.  We talked many times about the challenge of creating a new masculine aspect for the New Earth.  He embodied that, and he inspires me to move forward with teaching balance in how a man walks on the planet and how the sacred marriage between our masculine and feminine nature is the key.

I loved to make Brad laugh and he was such a willing audience.  He told me how he had to confront a neighbor one year who was firing his gun over the Wise Wolf Council.  I told him to remember next time to be sure to wear his “Drumming for Jesus” tee-shirt, and he said he would do that.

I can see how every inch of Isis Cove has Brad’s imprint on it.  He savored “community” and he built this one with love and humility.  If Star Wolf has been the “light” of this partnership, Brad Collins has been the “heat”.  His is not the part that was so brilliantly visual; his is the part that provides the conditions for the light to shine brighter.  He has a peaceful, quiet power that is no less commanding because it receives less attention.  How gratifying is it to see how many really did always see the truth of Brad; it is a tribute to this community.  We are like those blue creatures in the movie Avatar, we look into each other’s eyes and say “I see you.”

We have grown accustomed to seeing them:  Brad and Star Wolf, as if they are one person.  How many times have you said those two names as if they were one?  And I knew it would make me sad to see her, Star Wolf, without him, Brad, by her side.  Yet I knew she would be accompanied by her soul family.  And to take his place it takes many of us.  So we stand up and stand in and hold space for Brad and now I might really know what that means.  Because we do this in exchange for all the times Brad held space for us.  Like the Christ, he has given of his essential self to all of us and we have taken that in so the communion is complete.  Now we follow his example and we pass it forward.  You are in my heart, now and forever.  God speed, Brad Collins.
Posted by John Berry Deakyne at 10:03 AM No comments: